“A nice guy who wants to make a
difference in your life.”

Apparently a truck started to slow down due to foggy road conditions and was rear ended by another tractor trailer.  These two trucks stopped and then were hit by a third tractor trailer and a passenger vehicle.  The third truck was a HAZMAT vehicle carrying concentrated industrial cleaner that caught fire.

There were three people killed in the accident. 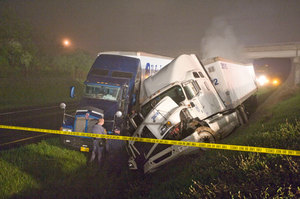 This is an awful wreck that caused severe personal injury and death to some innocent victims. These poor people that happened to be in the wrong place at the wrong time.

Foggy road conditions are extremely dangerous and I advise people to be extra vigilant and drive extra slowly during times of low visibility. I-81 is particularly dangerous due to the deadly combination of high truck traffic, twisty mountainous roads and frequent mountain for.

Download a free copy of our Accident Injury Book:
Hidden Inside Secrets Big Insurance Companies Don't Want You To Know About Your Claim.